The mayors of Paragould and Marmaduke proclaimed the first week of October to be National 4-H Week in their respective cities.

According to the proclamation, the program (part of the University of Arkansas Division of Agriculture) has provided more than 100 years of experience to young people aged 8-19 across the state. Through its emphasis on “Head, Heart, Hands and Health” – the program helps young people acquire knowledge, develop life skills and form attitudes that will help them to become self-directed and productive contributing members of society.

There are 140,000 participating members of Arkansas 4-H, in urban, suburban and rural clubs. But it could not achieve its current success without more than 16,000 program volunteers giving generously of their time, talents, energy and resources.

Throughout its history, the Arkansas 4H program has helped develop positive role models. And through its innovative, inspirational programs, Arkansas 4-H continues to build character and instill values. 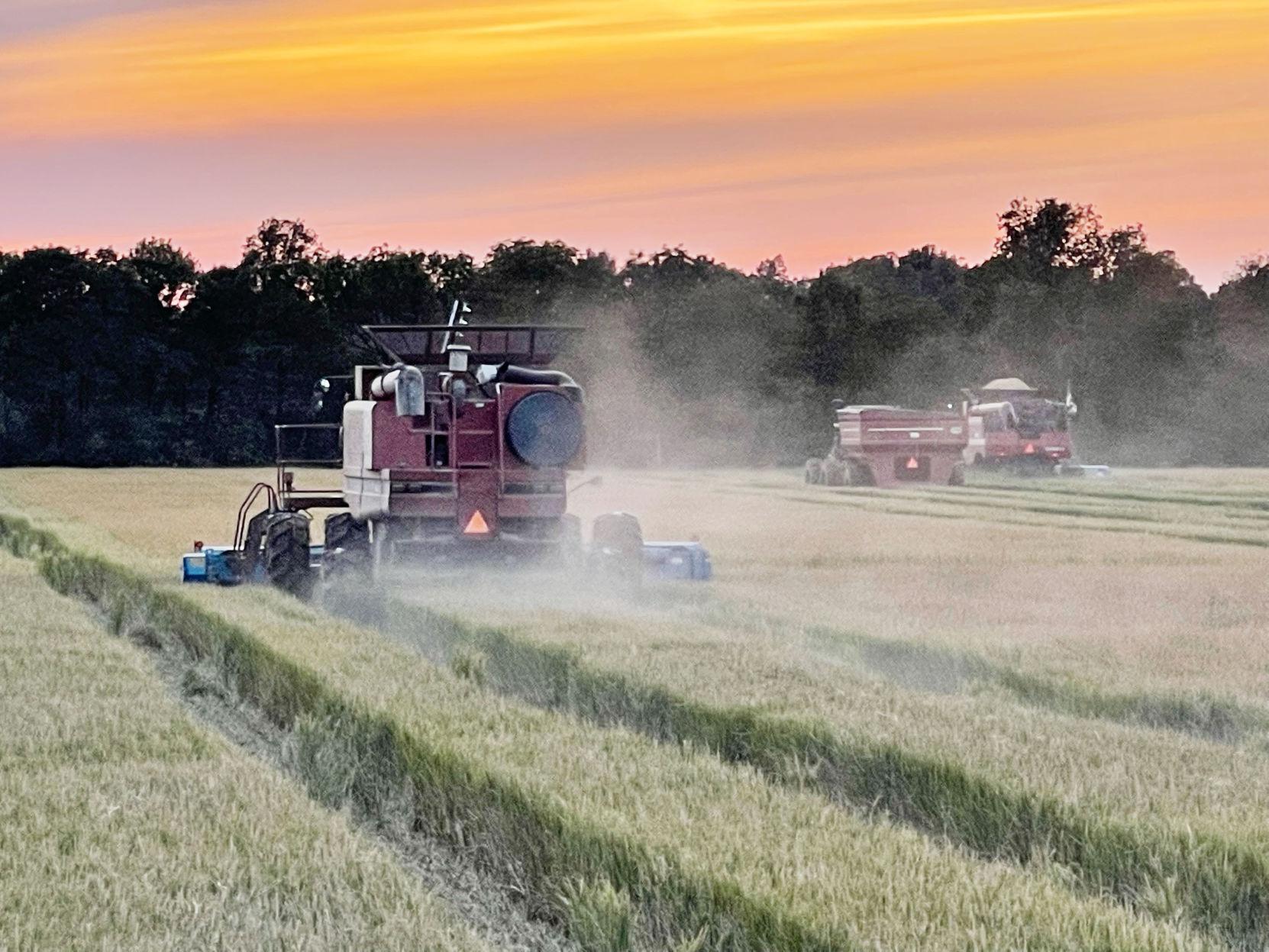 This photo of rice being harvested in Greene County was submitted last week by Mark and Buster Passmore. Send photos to be considered for publication in The Daily Press to editor@paragoulddailypress.com.

In one incident, the report of an unknown problem at the Greene County Courthouse saw police arrest Joseph L. Owens, 33, of Paragould, on charges of one count each of possession of less than two grams of a Schedule I/II controlled substance (methamphetamine or cocaine) and possession of drug paraphernalia to ingest, etc., both Class D felonies. Owens also faces misdemeanor charges.

According to a probable cause affidavit sworn by Detective Cpl. Aaron Gamber of the department’s Street Crimes Unit, the arrest occurred on Oct. 4, as the result of officers being dispatched to the courthouse to discover Owens passed out in the front lobby. They determined Owens was under the influence of controlled substances as he had difficulty speaking and staying awake. He also had difficulty standing without assistance, according to Gamber’s affidavit.

Owens’ probation officer was also on scene as he was there for court. The probation officer conducted a search of Owens’ person, and removed a small metal canister from his pocket that had 0.8 grams of methamphetamine concealed inside, according to the affidavit. Owens is an active supervision probationer and has previous drug convictions.

Owens is being held in the Greene County Detention Center (GCDC) on a $50,000 cash-only bond.

In the other incident, deputies arrested Angela Kay Tate, 45, of Jonesboro, on a charge of one count of possession of less than two grams of a Schedule I/II controlled substance (methamphetatime or cocaine).

According to a probable cause affidavit sworn by Deputy Sgt. Zakkery Crocker, the arrest took place Oct. 5 as the result of a traffic stop on a vehicle that had expired tags. During the stop, the vehicle’s driver told deputies there were controlled substances in the vehicle. During a probable cause search, the deputies reportedly discovered suspected methamphetamine in Tate’s purse, inside the vehicle.

Tate is being held without bond in the GCDC.

LITTLE ROCK (AP) — Arkansas lawmakers on Friday rejected legislation that would have prevented businesses from requiring employees to say whether they’ve been vaccinated against COVID-19.

The majority-Republican House voted 41-46 in favor of the Senate-backed bill, which would have created a “right of privacy” for employees and contractors regarding their vaccination status. The proposal would allow employees to sue under the state’s civil rights law for any violations.

The proposal is among several limiting or prohibiting employer vaccine requirements that have dominated a session that was intended to focus on congressional redistricting. The proposals have primarily been in response to President Joe Biden’s order that businesses with more than 100 employees must require vaccinations or weekly testing.

Opponents said the proposal would force businesses to choose between exposing themselves to lawsuits by workers or face federal fines for not complying with Biden’s order. They also said it would have jeopardized Medicaid and Medicare funding for health care facilities throughout the state.

A call to the office of Gov. Asa Hutchinson has resulted in the caller’s arrest on felony charges.

Greene County sheriff’s deputies have arrested James Eugene Ward, 63, of Paragould, on a charge of one count of terroristic threatening, a Class D felony.

According to a probable cause affidavit sworn by Detective Capt. Tony Williams of the department’s Criminal Investigation Division, the arrest occurred as a result of a Sept. 29 referral to the department of a phone message that was called into the Governor’s office allegedly by Ward.

In the course of the message, the caller said that he was tired of being harassed by his neighbor, adding that police would not do anything about the harassment. Toward the end of the conversation, he reportedly said that when the individual that set him up to be a registered sex offender gets out of prison, he will be lucky if he (i.e. Ward) doesn’t kill him. Ward also asked that he receive a call back from the Governor’s office.

According to offenderradar.com and the Arkansas State Sex Offender Registry, Ward is listed as a Level 3 sex offender. According to the Greene County Detention Center, he was booked into that facility on Oct. 1. Ward remains there on a $10,000 cash-only bond.

The report of a domestic disturbance followed by a gunshot has sent a Marmaduke man to jail on multiple felony charges.

Marmaduke police arrested Michael Blake Butler, 32, on charges of one count of possession of a firearm by certain persons (i.e. a convicted felon using the firearm in another crime), a Class B felony; three counts of first-degree endangering the welfare of a minor and one count of aggravated assault on a family member, both Class C felonies. Butler also faces misdemeanor charges.

According to a probable cause affidavit sworn by Ptl. Marcus Keller, the arrest took place Oct. 6 after he was dispatched to a verbal altercation. Shortly after he arrived at the location of the reported altercation, Keller heard what sounded like a gunshot from inside the residence. He asked for backup from the Greene County Sheriff’s Department.

As Keller moved to the back of Mrs. Butler’s vehicle, he observed her and Michael Butler yelling at each other, and saw Butler bend down by the driver’s side of the vehicle. Keller drew his service weapon and pointed it at Butler. He then commanded Butler to show his hands, which he did. But instead of complying with Keller’s further commands to move to the back of the vehicle and to place his hands on the back glass, Butler walked around to the passenger side of the vehicle with his hands up, telling Keller to shoot him, according to the affidavit.

Keller then switched from his service weapon to his Taser, at which time Butler reportedly started running toward the north end of the residence. Advising dispatch of Butler’s actions, Keller tried to cut Butler off, but Butler made it back to the driver’s side of Mrs. Butler’s vehicle and was trying to get the keys to flee the scene.

Deputy Lt. Rocky Weber then arrived on scene, drew his service weapon and commanded Butler to get on the ground, which he did. Weber and Deputy Sgt. Justin Jackson then took Butler into custody without further incident. The two escorted Butler to Jackson’s patrol vehicle, and told Keller that Butler had a box of 9-mm ammunition in his pocket. Keller then spoke with Mrs. Butler to find out what had happened. According to Keller’s affidavit she said he had fired a shot in the house that had glanced off the dresser, gone through a wall and landed in the front yard.

In response to Keller’s question, Mrs. Butler said she didn’t know where the gun was. He remembered, however, that Butler had knelt down beside the vehicle earlier in the incident for some reason, so he looked under the vehicle, and found a handgun.

After taking photographs of the weapon and the ammunition, Keller secured both in his vehicle. He photographed the front door broken by Butler as he left the house, as well as the bullet hole in the wall. Mrs. Butler told Keller her three children were in the house with her at the time of the incident.

Butler is being held in the Greene County Detention Center on a $15,000 cash-only bond.