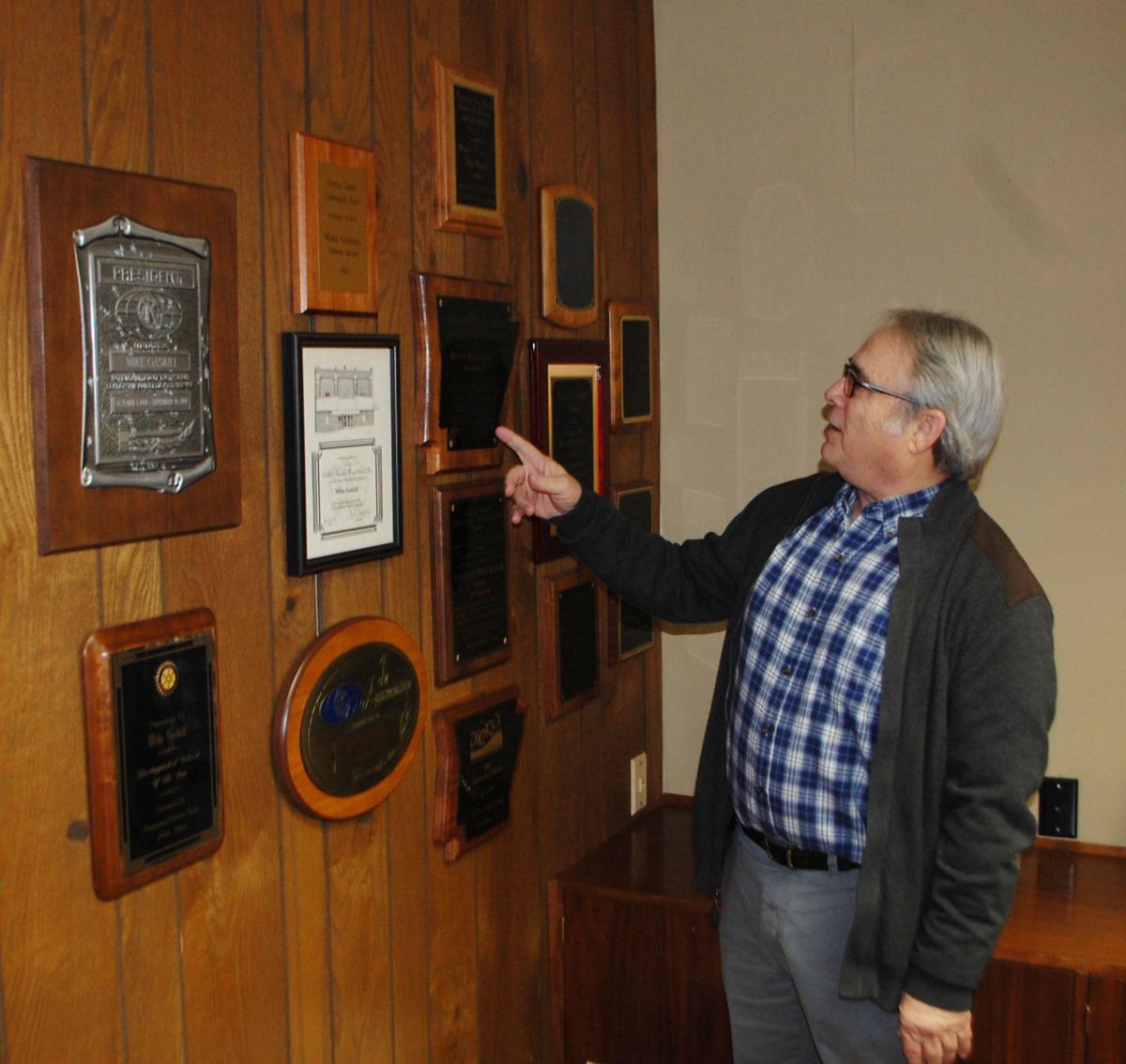 Outgoing Paragould Mayor Mike Gaskill points to some of the awards he has received from the state of Arkansas, the Arkansas Municipal League – of which he served as president for several years – and other entities, in recognition of his leadership of the city over the last 23 years. 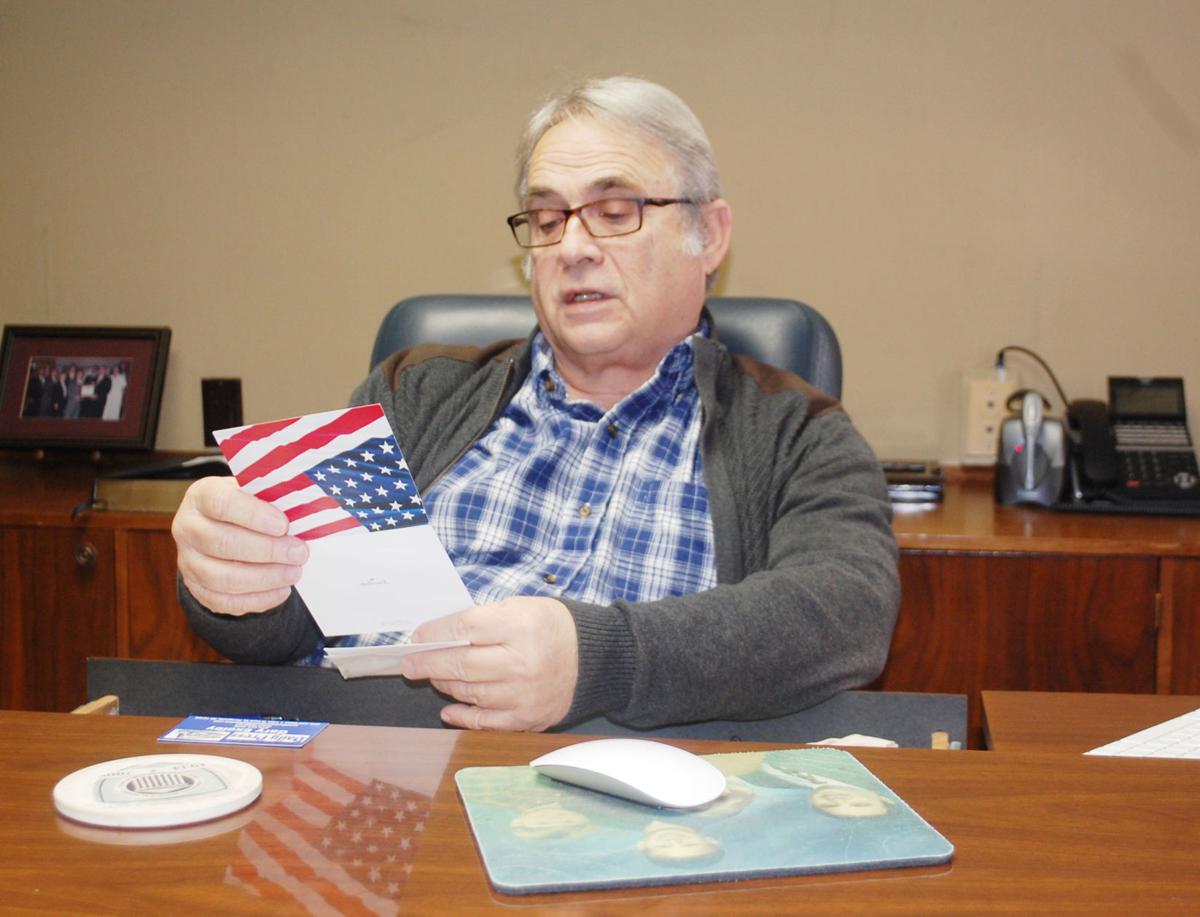 Mayor Mike Gaskill views a card from a well-wisher on his retirement, effective at close of business today.

Outgoing Paragould Mayor Mike Gaskill points to some of the awards he has received from the state of Arkansas, the Arkansas Municipal League – of which he served as president for several years – and other entities, in recognition of his leadership of the city over the last 23 years.

Mayor Mike Gaskill views a card from a well-wisher on his retirement, effective at close of business today.

As Mike Gaskill looks back on his 23 years as mayor, he said he was guided by one principle. “When people would ask me to do stuff,” he said, “I’d say: ‘we’ll do it when we can, unless it’s prohibited.’”

So it was, the outgoing mayor said, that (among other things) the city got a community center, a 911 center, four new fire stations, a police substation, fully paved city streets, more sidewalks, tornado warning sirens and an airport able to sustain itself on its own revenue.

In addition, Gaskill said, the city had $750,000 in the General Fund and $1 million in its Street Fund – all of which could be expected to be spent just on paving of city streets – when he took office. But it now has cash reserves (between the two funds) of more than $21.5 million. He had previously noted such a reserve has enabled the city to undertake some fairly expensive major projects simply by using money from those reserves, without having to ask for a tax increase to fund bonds, or similar mechanisms.

Gaskill said he had been asked to run for mayor back when Charles Partlow was mayor. “But I said I wouldn’t run against him,” Gaskill said. “And then people started asking me to run when he finished. People would ask me that all the time, lots of people.”

But rather than make a quick decision, Gaskill decided to ask his wife Tammy what she thought of the idea. “’She said: ‘you do stuff for the city all the time,’” he said.

Included among those who had asked him to run – and who worked to make the campaign a success – Gaskill praised John Bland, Bill Fisher, Joe Wessell, David Dudley, Keith White, and campaign treasurer Jannie Distretti.

Gaskill said what gave him the most satisfaction as mayor was being able to deal with the heads of the various departments. “And we wanted all the departments to be in good shape,” he said.

Gaskill had repeatedly said that he would continue to serve as mayor (provided the voters allowed him, that is) while there were projects he wanted to see through. Among those projects were the Community Center on Highway 49 South, the 911 Center and the number 4 fire station across the street from the Community Center.

“If we hadn’t built that one,” Gaskill said, “our ISO [Insurance Services Office] rating would go up.” A city’s ISO rating can range from 1 (the best) to 10. It is determined by the city’s firefighting capability and drives the cost of homeowners’ insurance, such that a higher rating means a more expensive premium. Paragould currently has a second-best-available “2” rating.

Another project in which Gaskill took great satisfaction was the widening of Eight Mile Creek, long a source of concern due to its propensity to flood along its course through the city. He had previously noted one major flood, in 1974, had inundated the parking lot of Paragould High School where he was a student; he had lost his car to the flood.

“When I first came in,” Gaskill said, “there were no tornado sirens.” Radio and television stations would broadcast any tornado warnings as they became available, but such warnings were not available to everyone. “If someone were outside,” he said, “they wouldn’t know there was a tornado until it arrived.”

So Gaskill had the city council approve the purchase of 12 sirens, placed at various locations throughout the city.

He also noted with pride the construction of the 911 Center, which now handles all emergency calls for both the city and county. “Charlie Partlow had said we need a central dispatch center,” Gaskill said, “and so had [then-sheriff] Dan Langston.”

When Gaskill took office, the city dispatched the police and fire departments, the Sheriff’s Department dispatched for the county, and any requirement for an ambulance obliged a call to Arkansas Methodist Medical Center. “So when I got ready to build it,” he said, “I wanted a place that was more than a mile from downtown.”

The distance requirement came from the need to locate the dispatch center far enough away from the rail line passing through the downtown area to eliminate the need for evacuation of the dispatch function in the face of a toxic spill from a derailment. Gaskill noted that Ronnie Brengard had donated the land to facilitate the center’s construction at its current location on South Pointe Drive. “And I [i.e. the city] bought more land in case we need to expand,” he said.

Among numerous other projects in which Gaskill expressed satisfaction, were:

The widening of West Court Street to include a turning lane

The widening of Reynolds Road for the same reason

The requirement for increased width of city streets in new subdivisions from 22 to 26 feet, to enable trash and fire trucks to turn around as needed

Gaskill said in addition to satisfying the need for the 911 Center, one of his biggest challenges as mayor was an insufficient number of police officers.

Gaskill noted there was nothing he had wanted to accomplish that he’d been unable to accomplish. “I got elected in 1997, and in 1998 I started getting things done,” he said. “When there were no projects left that’s when I decided to step down. I don’t want to be one of those people who just hangs around.”

When his retirement begins tomorrow, Gaskill plans on taking time off. “I’ve worked for 54 years,” he said, “and I turned 65 in August.”

But that won’t mean he will be unavailable to successor Josh Agee for questions.

When Charlie Partlow left office he said that if anything comes up, to call him, Gaskill said. “That’s the same as I said to Josh.”