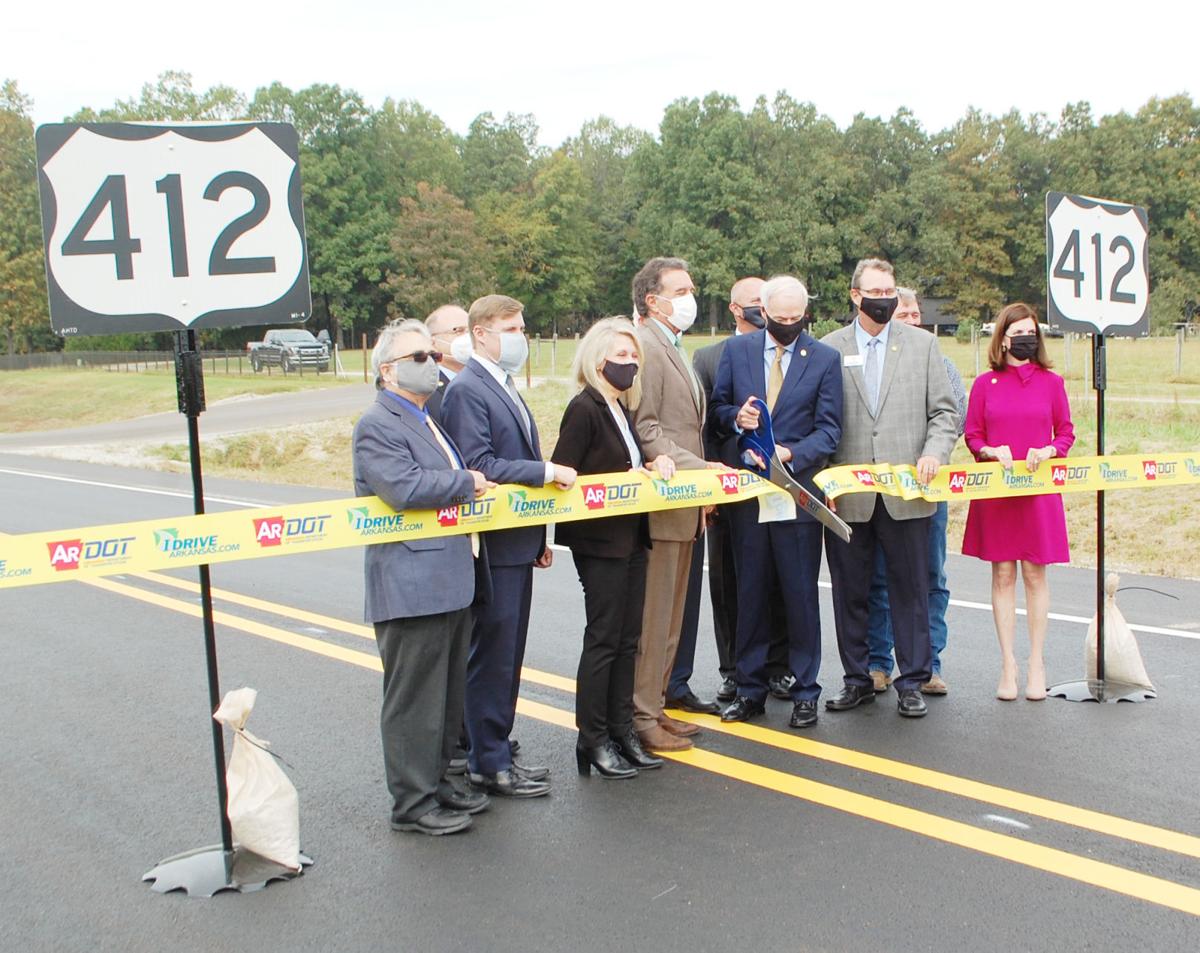 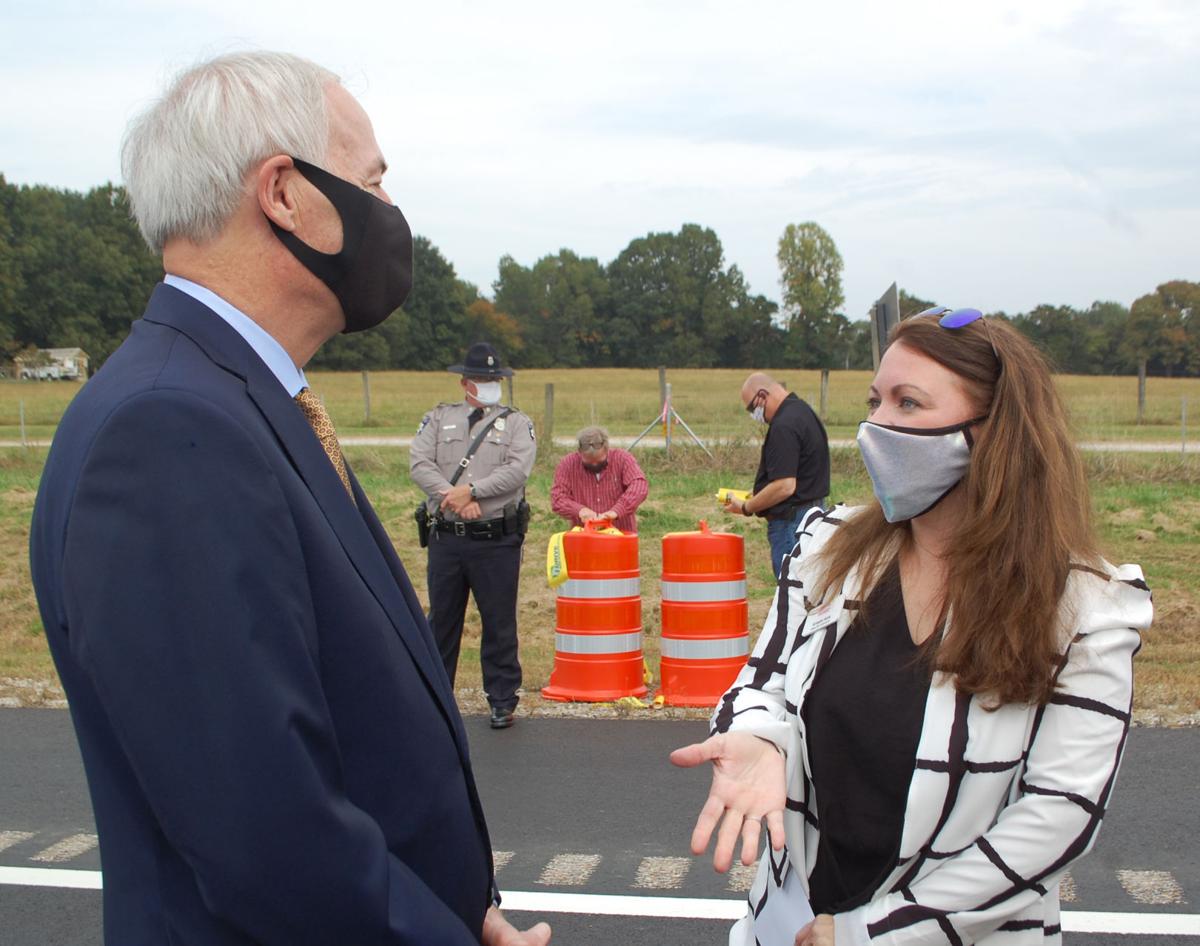 Arkansas Gov. Asa Hutchinson listens as Kristin Kirk, daughter of the late Tom Kirk, speaks of her father’s efforts to make the Highway 412 bypass a reality. “He’d be so proud,” she told the governor. Kirk passed away Nov. 24, 2019.

Arkansas Gov. Asa Hutchinson listens as Kristin Kirk, daughter of the late Tom Kirk, speaks of her father’s efforts to make the Highway 412 bypass a reality. “He’d be so proud,” she told the governor. Kirk passed away Nov. 24, 2019.

Editor’s Note: This is the second of two articles covering the opening of the west bypass. The first article was published in Saturday’s Weekend Edition of The Daily Press.

After several delays due to weather and other circumstances, the entirety of the Highway 412 bypass is open.

“We can’t have economic development without roads,” said Arkansas Gov. Asa Hutchinson in remarks before the roadway opened to traffic. “Infrastructure is critical.”

Hutchinson took the opportunity afforded by the opening of the roadway to call for passage of Issue 1, which would make permanent the half-cent sales tax dedicated to roads.

“People ask, ‘why does it have to be a Constitutional amendment?’” he said. “It’s because the original half-cent sales tax is in the Constitution.”

The tax, referred by the 2011 Legislature to voters in 2012, levied the tax for 10 years, beginning July 1, 2013. If Issue 1, on the November ballot, does not pass, the current half-cent sales tax will expire on June 30, 2023. Hutchinson noted the tax provided the funding for the 412 bypass, among other projects.

U.S. Highway 412 runs from the Oklahoma state line through Siloam Springs, Springdale, Harrison, Mountain Home and Paragould to the Missouri state line. Sections of it have four lanes while others still have two lanes.

“Tom Kirk had been a driving force behind transportation infrastructure including the bypass,” said Hutchinson in recognizing one of the prime movers who was absent. Kirk passed away Nov. 24. Thanks in part to his efforts, the 412 bypass is now complete, while the 412 five-lane project to Walnut Ridge and the widening of Highway 49 to four lanes are well in hand.

Paragould Mayor Mike Gaskill reminded the audience that not only does the state receive funds from the half-cent sales tax, but counties and cities do as well.

“The city gets 15 percent of the tax collected in the county,” he said, “and if that tax goes away, we’ll lose money.”

“I’m very excited that this is done,” said Gazaway, “and it’s good to see the governor here.”

“I’m glad it happened,” said Johnson. “It’s been a long time coming, and it’ll help the [traffic] situation on the middle of town.”

According to District 10 Engineer Brad Smithee of the Arkansas Department of Transportation, length of the bypass is 10 miles total; the length of the west bypass is 5.175 miles. The bypass begins at the highway’s intersection with 14th Avenue, runs south and west around Paragould to Highway 49 South and then west and north to rejoin the highway at its intersection with 72nd Street.

Construction of the west bypass began in January 2017. Although cost of the western part of the bypass was estimated to be $13.1 million, the final cost was $13.4 million.

The eastern bypass began construction in January 2012. It was effectively finished in March 2015. Its total cost came to $28.2 million. All together, the bypass project took nearly eight years, at a combined cost of $41.6 million.