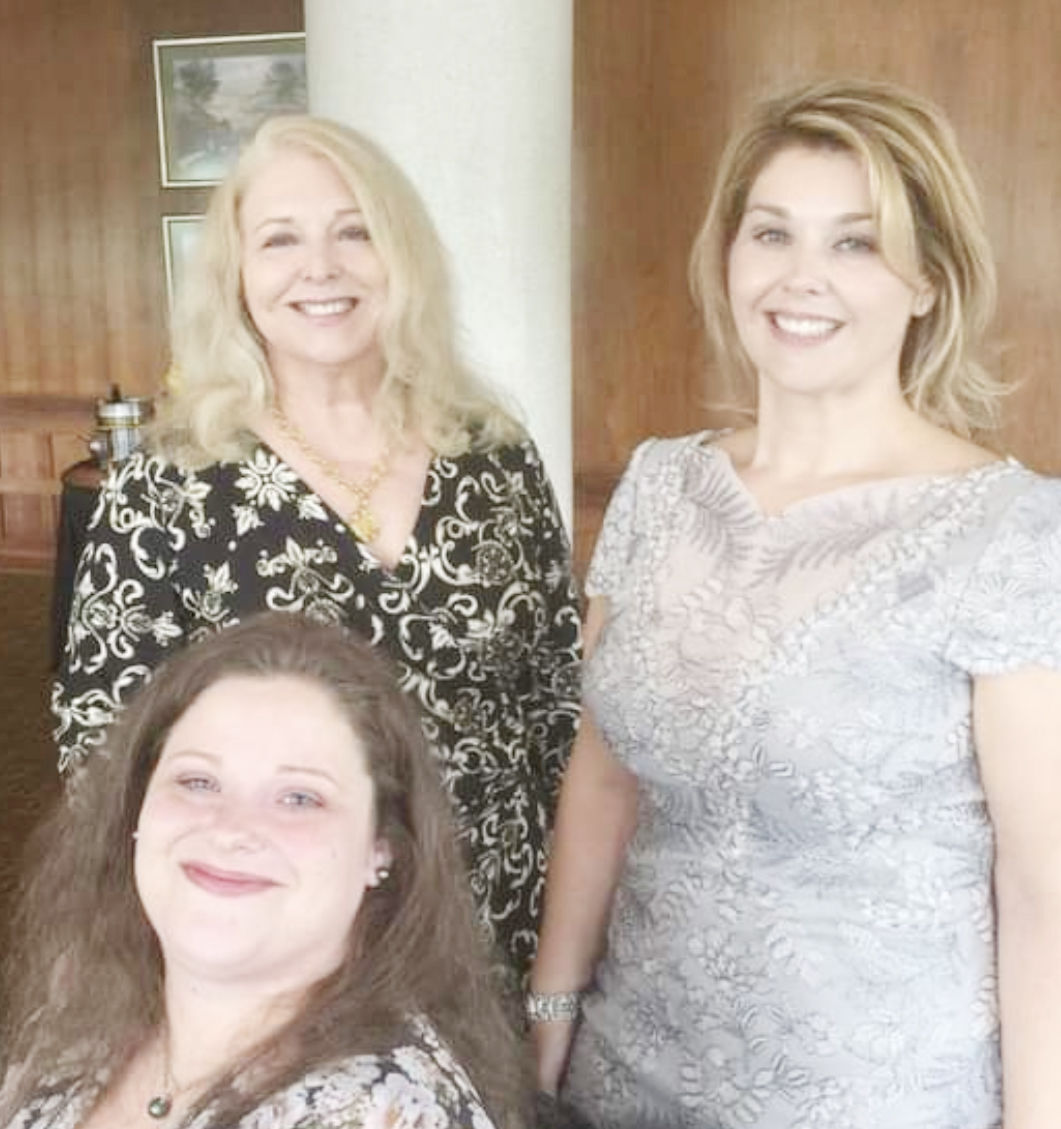 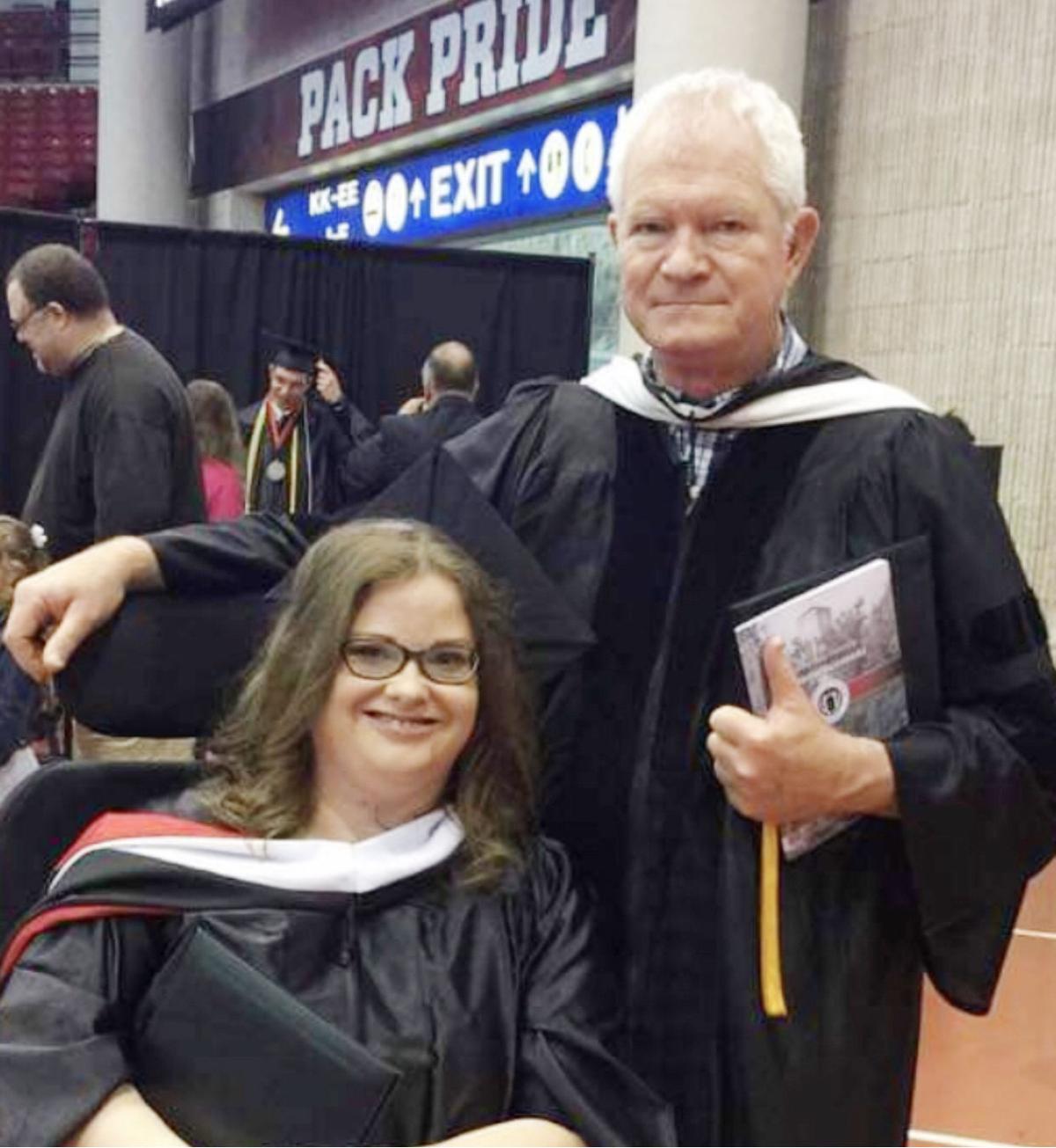 Brittany Reeves with Arkansas State University English professor Dr. Richard Ball, one of four instructors Reeves credits with enabling her to achieve no less than five degrees from the school – in the face of numerous challenges. 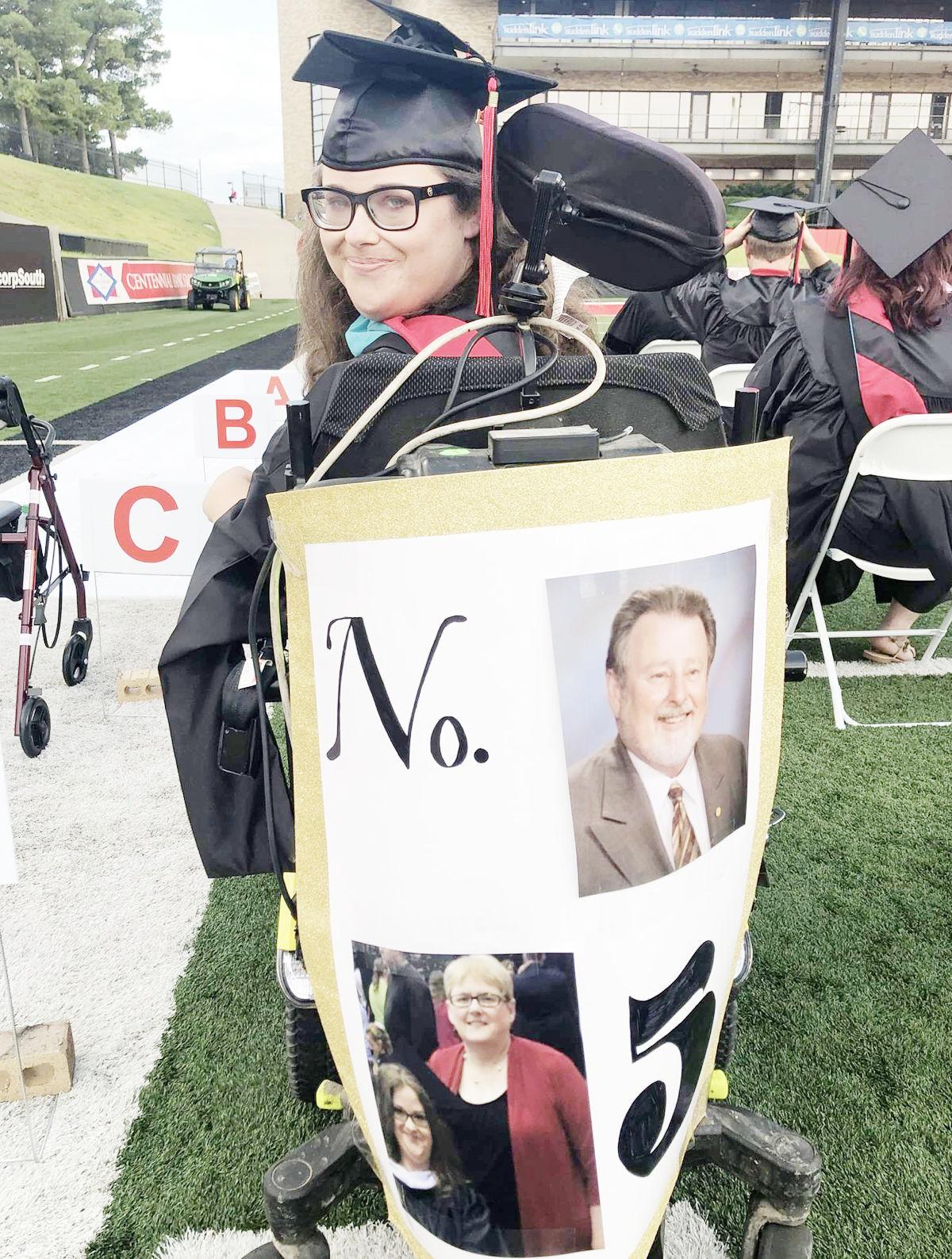 Brittany Reeves with pictures of her two “A-State parents,” Dr. Juanita Cooksey and the late Dr. Richard McDaniel. She credited both with enabling her to complete five degrees during a record 18 years of continuous attendance at ASU. And Reeves is not finished yet: “I’m actually in an online program at Touro University at Henderson, Nevada,” she said. “It’s a three-year doctoral program, for a doctorate in education.”

Brittany Reeves with Arkansas State University English professor Dr. Richard Ball, one of four instructors Reeves credits with enabling her to achieve no less than five degrees from the school – in the face of numerous challenges.

Brittany Reeves with pictures of her two “A-State parents,” Dr. Juanita Cooksey and the late Dr. Richard McDaniel. She credited both with enabling her to complete five degrees during a record 18 years of continuous attendance at ASU. And Reeves is not finished yet: “I’m actually in an online program at Touro University at Henderson, Nevada,” she said. “It’s a three-year doctoral program, for a doctorate in education.”

Brittany Reeves has a message for those with disabilities: I did it, and you can too.

She also holds the record for the longest continuous attendance at the school, 18 years.

But the real story is how Reeves got there. “I really hate the term ‘disabled,’” Reeves said. So suffice to say she faced challenges from birth that most people likely can’t imagine. “I was born in 1983,” she said, “two weeks late.”

Delivered through Caesarian section, Reeves said, the doctors discovered she had myelomeningocele spina bifida, as well as both hips dislocated, club feet, and hydrocephalus. According to the American Academy of Physical Medicine and Rehabilitation, myelomeningocele is a type of birth defect where the spine does not close all the way before birth, causing parts inside the spinal column to bulge out of the body. It is the most severe type of spina bifida.

In addition, hydrocephalus, according to the National Institutes of Health, is an abnormal buildup of fluid in the ventricles (cavities) deep within the brain. This excess fluid causes the ventricles to widen, putting pressure on the brain’s tissues.

Therefore, Reeves said, doctors told her parents there were two options for their baby daughter. “’You can either take your baby home – and this is what I would recommend,’” she said the doctor told her mother, “’surround her with people that she loves, and let her pass away.’”

Reeves said the second option involved performing surgeries that would “potentially” save her life. “‘But there’s no guarantee of that,’” Reeves said the doctor continued, “‘and she will be institutionalized for the rest of her life.’” That, she said, meant that as the doctor saw the situation, Reeves would be unable to feed, dress or otherwise care for herself.

The response from Reeves’ mother, Sherlita Reeves (now Amlen), was blunt but concise. “My mom told the physician: ‘I’m her mother,’” she said, “‘you’re the physician. ‘’You do your job and I’ll do mine.’”

In fact, Amlen so focused on doing her job as a mother, that, already holding a master of science in biology, she went back to school to acquire a nursing degree. Reeves said her father, Christopher Reeves, was already a Licensed Practical Nurse in the Arkansas Army National Guard. “It made her frustrated,” Reeves said, “because my father would know what was going on, but my mother didn’t.”

Reeves noted Amlen received the nursing degree, and in 1991 was accepted into medical school at the University of Arkansas for Medical Science (UAMS). While Amlen was in her first semester at UAMS, however, Reeves’ father passed away. So Reeves’ maternal grandmother, also a nurse, moved in to care for Reeves and her older sister Destiny (now Geddis).

Fast-forward to high school in Atlanta where Amlen had gotten a job with the Centers for Disease Control, Reeves said that the school she was to attend had never had a student with a disability of any kind take up the college preparation course of study. “If you had a disability,” she said, “you were automatically placed in vocational prep[aration] for graduation.”

Reeves said that during a meeting with staff, instructors and others in the school’s administration, all had sought to dissuade her from pursuing a college degree. “They told me: ‘If you apply, you won’t get accepted,’” she said, “and if you do get accepted, you won’t survive the first semester.’”

But Reeves recalled her mother’s words earlier. “I told them, ‘prepare me the best you can,’” she said. “’You do your job, and I’ll do mine.’”

Not that all was smooth sailing for Reeves physically. Various additional medical problems eventually resulted in the loss of toes and one of her legs below the knee as the result of osteomyelitis. According to Johns Hopkins Medicine, osteomyelitis is an infection of the bone. “It’s very bad,” Reeves said.

But she persevered, and was accepted to ASU in 2002. “My mother was in Atlanta but I wanted to go to ASU,” she said. “It was important to me to develop relationships with my father’s side of the family.”

At ASU, Reeves said, she acquired benefactors who were instrumental in furthering her college studies. “One was [ASU vice-chancellor] Dr. Rick McDaniel,” she said, “and he called me in Atlanta.”

Reeves said McDaniel had asked her why, with the plethora of local colleges and universities, she wished to attend ASU. “I told him my mother had graduated from ASU with three degrees herself,” Reeves said. So McDaniel asked her mother’s name. “’Oh, I know Sherlita,’” she said McDaniel replied. “And when we came down to tour the school, he promised my mother he would watch over me.”

Reeves said that not only was McDaniel true to his word, he extracted a similar promise from his successor (upon his retirement), Dr. Juanita Cooksey. “I consider those two my A-State parents,” she said. “They were there for me.”

Reeves also singled out Dr. Cathy Calloway, head of the graduate English program at ASU, for thanks, as well as Dr. Jerry Ball. “All four of them have bent over backwards to make sure that I have everything that I need to be successful,” she said. “And they are the reason I was able to do what I was able to do.”

At one point a prolonged hospital stay prevented her from taking exams in several courses. But when she asked one professor if she could take the test after her discharge from the hospital, the professor told her she either had to take the exam as scheduled or take a “drop grade.” “Well, I had a fever of 104 so there was no way they [at the hospital] were going to discharge me,” Reeves said.

“During my 18 years there, I studied, and I got my degrees,” Reeves said, “but hopefully, I was able to make the campus more accessible for people with disabilities.”

She added that she sought, by telling her story, to show that someone with even a severe disability can accomplish what they want, given people who believe in them, and the resources. “We can achieve anything that we’re capable of achieving,” she said. “And I want to be that advocate.”

Reeves’ own next step continues what she has already accomplished, in the same vein and for the same reasons. “I’m actually in an online program at Touro University at Henderson, Nevada,” she said. “It’s a three-year doctoral program, for a doctorate in education.”

Her hope, Reeves said, is that she could head a disabilities service office. “Or I can work for student affairs,” she said. “When I came to Arkansas State, the age of the Internet was just starting, and schools having web pages was in the infancy.”

The comment, was true, of course, Reeves noted. “But I have tried to help Arkansas State with their ability to advocate for students whose disabilities are seen,” she said.

Now, the website has been changed, Reeves noted. “The problems that I have had at my high school and my university,” she said, “is that able-bodied people have been in charge of my education. There wasn’t someone there who had been in my shoes.”

Advocating for someone is therefore very difficult for someone without that kind of experience. “And I want to be that advocate,” she said. “I want to ‘pay it forward,’ what Dr. Rick [McDaniel] and Dr. [Juanita] Cooksey did for me.”

Reeves noted that her health problems are ongoing.

“I’ve had over 30 operations in my lifetime,” she said, “but I’m the luckiest person with spina bifida to exist. I’ve had the same shunt for 38 years.”